This is one of those builds( like the Kpgc10) where i wanted to do something crazy and different. An online Toyota competition started a few months ago on Modelscientist forum. Since I’m a fan of the bosozoku culture I tried to redo the style but with a modern flare. I used a Tamiya toyota BB as a base as the van is nice and square to start with. The front lip was extended, wider arches added and a spoiler. I wanted to do a special paint job and since i havent sen a Riddler themed van I thought that was what I wanted to do. The paint scheme is from the Riddlers jacket but I inverted the colours. A set of Bilbo wheels will be used to keep it with the culture along with light up number plates. This is what it looks like so far. 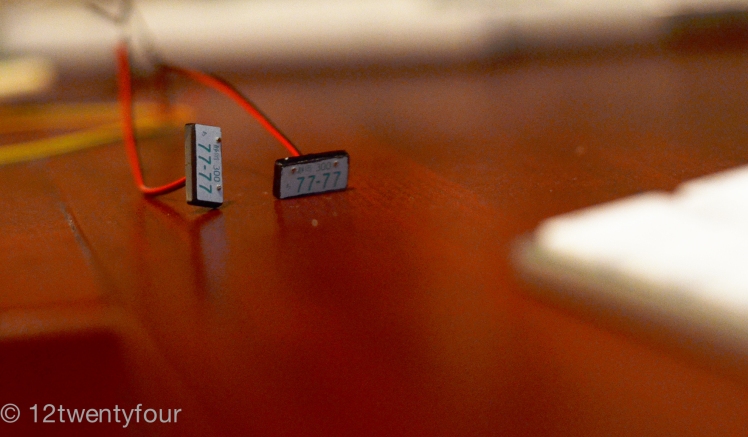 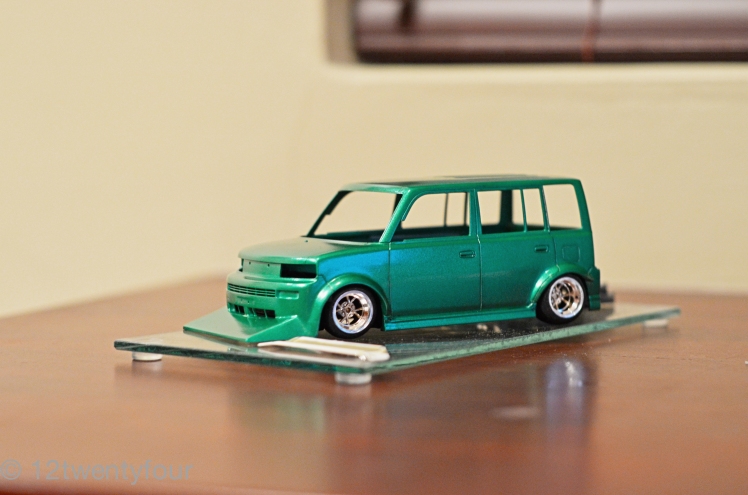 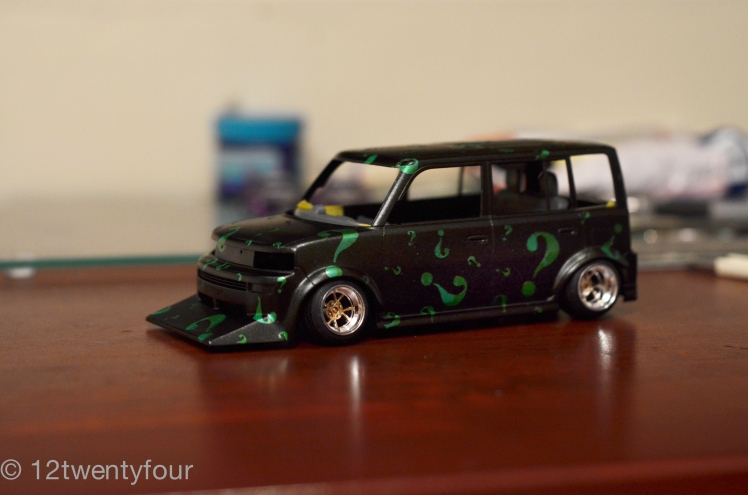 Heres a tease pic of what happened with the BB today. more pics will be posted soon 😉 The result came out much better than I expected. The colour unfortunatly I cant say what it is as it was made up and altered as the build progressed lol. But its certainly doing the job.

Heres a tease of the interior and what I’ve done

As promised here’s a better picture of the interior. 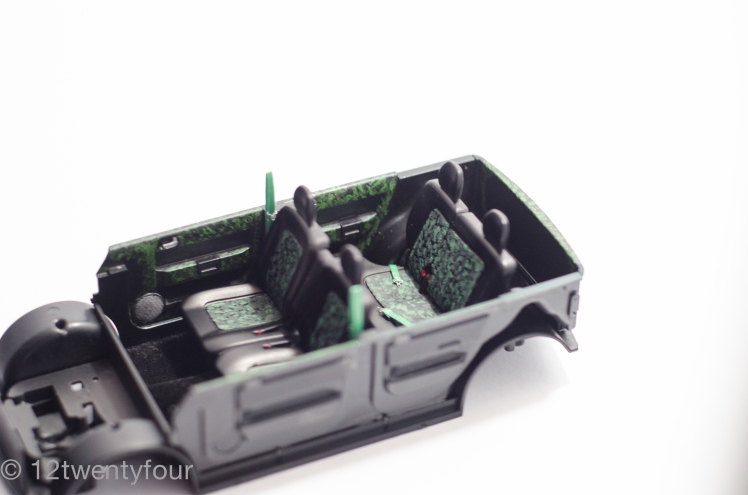 I have been getting a few requests about the paint. Well in all honesty the paint job itself is a bit of a riddle with no answer. Lets start from the beginning though.

The idea was to create a Bozo inspired van with a theme. I decided to do a Riddler theme as i havent seen it done before. So for those who know the Riddler character, he is always associated with a question mark. So that was the first place I started. I decided to do a random approach when applying the question marks just like his clothing. But before the question marks were put on the car was sprayed with Tamiya metallic green. This formed the base colour of the question marks. Once dried the question mark masks were applied. Once I was happy a special mix of black mixed with candy green and ice pearl was sprayed over. As that was drying a mixture of candy green was made from yellow and blue and again ice pearl added.This mixture had a bit of a yellow tint to it. The question masks were removed to expose the two tone paint job. Once that dried another batch of candy green was mixed although this time with a bit more blue to darken the green. It too had ice pearl in the mix. This tinted the green to a perfect Riddler colour. the final layer was the 2k clear. Here’s another picture showing the flakes in the paint.

So here’s a little mock up. Spent the day doing the exhaust and flatten the body so its ready for another coat of clear. Getting exciting now and I cant wait to see it done. 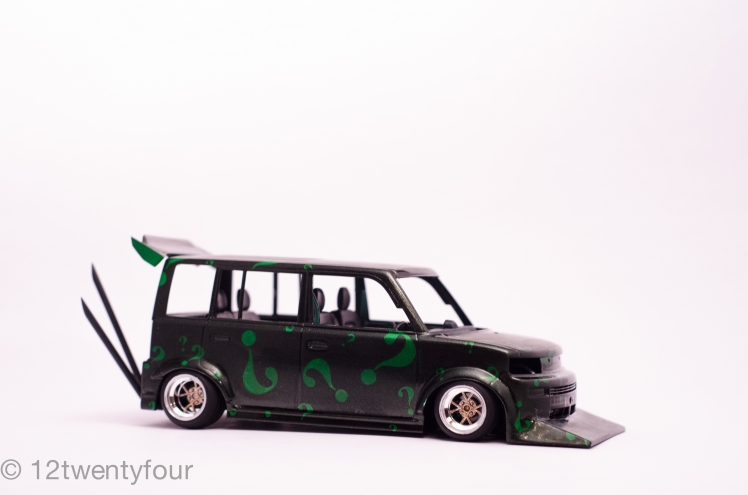 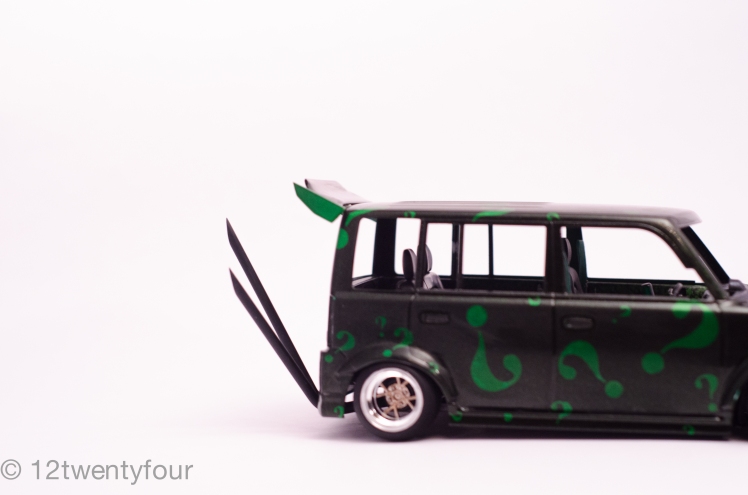 Here’s a new update. I was relooking at the interior and felt it needed something extra. I decided to add some special riddler floormats to add a special touch to the interior.
What do you guys think? 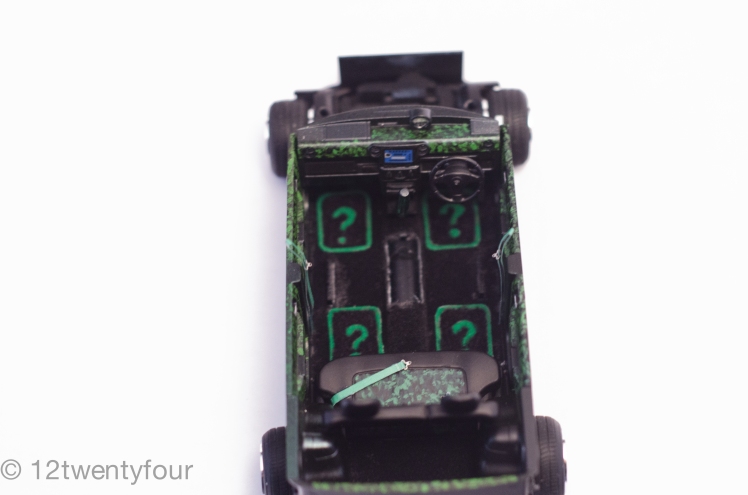 The body was recleard as well to add some extra shine.

So this will probably be my final update for this build till its complete. It was a bit of a struggle to fit the lighting into the body and have everything else fit perfectly, but I got there in the end. The lenses of the car were a bit tricky as I wanted it to fit the theme but also not stand out or be too boring( i.e standard). Since part of the theme is green I decided to make the indicators green and the rear lenses smoked to keep the theme tied together. 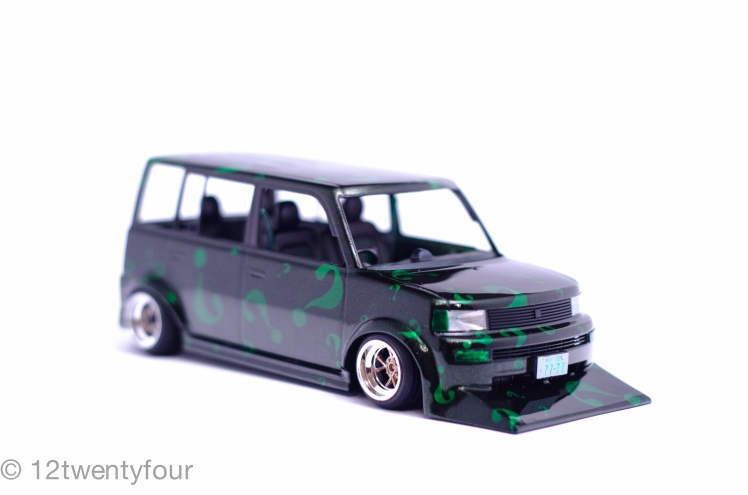 3 thoughts on “The riddler BB”